Bus Routes to and from St Cross 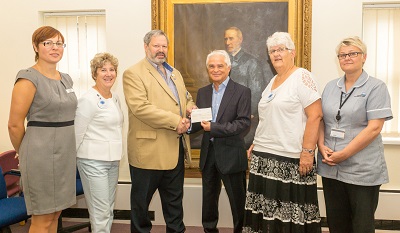 The Rugby Group Benevolent Fund has donated a massive £20,000 to take the total received by the Appeal to over £108,000.

Benevolent Fund Trustee Ian Southcott, said "The trustees of the Rugby Group Benevolent Fund were pleased to support the Friends of St Cross Diamond Jubilee Appeal and the Phlebotomy Relocation Project in particular as we  recognise the excellent work of the Charity over the years. We can see that this project will make a real difference to the many people who attend the service now and in the future."

Willy Goldschmidt, Vice Chairman of the Charity, said as a result of the success of the Appeal the Friends are now in active discussions with the Trust as to ways in which the Charity can support the continued expansion of Day Surgery and Children's Outpatients at St Cross. No timetable has been set for these projects but we and the Trust hope to make further announcements in the coming months. In addition to committing £130,000 to the Phlebotomy Relocation Project, the Charity expects to spend another £50,000 in 2015 on various items of equipment, some of which we have already reported on and which not only improve the patient experience but also facilitate the expansion of services offered at St Cross and in the Community Service.”