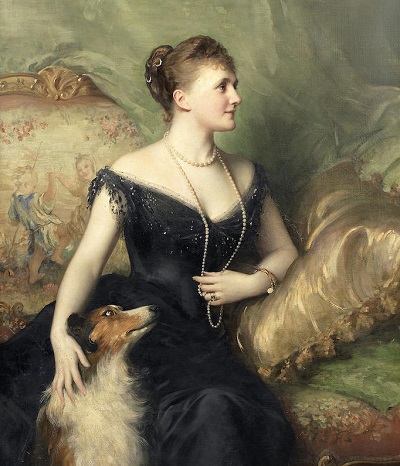 In 1885 she married Mr. John Arthur James. The couple moved to Coton House in 1881 where they established the Coton House Stud. Both she and her husband were interested in horse racing and hunting. They owned many successful racehorses using the same trainer as their friend Edward Prince of Wales, later to be Edward VII. They were members of the Atherstone, Pytchley and other hunts and Venetia continued to hunt until over 70 years of age.

The couple's London town house was an ornate palace of Italian marble, onyx and alabaster, famous for its red marble staircase and beautiful Angelica Kauffman frescoes and ceilings.

After her husband's death in 1917, Mrs. James continued to breed horses and hunt. She was a distinguished amateur actress holding entertainments at Coton House. She was elected President of the Rugby and District Boy Scouts Association in 1917 and made a Justice of the Peace in 1921. Her beneficence towards the Rugby hospital continued throughout her life; she endowed the new out-patients department in memory of her husband in the 1920s. She died shortly before her 87th birthday on 2 May 1948. She left pictures by Titian, Reynolds and Gainsborough to the National Gallery, London.

The portrait was painted by Sir Samuel Luke Fildes RA (British, 1843-1927) and is no longer owned by the Trust. and the text above was taken from the auction catalogue when the portrait was sold

Her magnificent contribution to the development on the Hospital of St Cross is illustrated in the Early Photos pages of this website.

Mr and Mrs James were the last private owners of Coton House and a little more of their story can be found on this link.

A group photo, taken at Coton House,  which includes King Edward VII is to be found on this link.