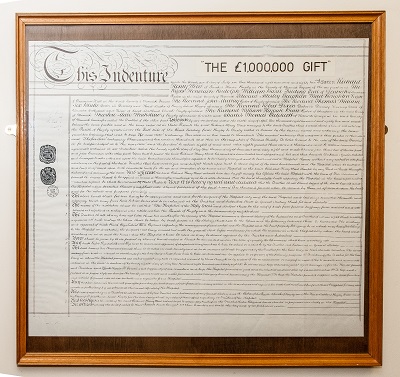 This facsimile of one of the indentures which sets out the initial funding and management arrangements for running of The Hospital of Holy Cross is located on one of the walls of the Octapus centre.

This indenture was made on 27th July 1882 and deals with a gift of £10,000 from Richard Henry Wood to the Trustees which were to be appointed to run the Hospital. A label was added to the facsimile some time ago to reflect the value in today's money. Depending on the inflation basis used the total value of all the donations could be estimated at between £3m and £10m today!

This indenture refers back to earlier indentures made on

28th May1868 - granting Richard Henry Wood the right to build a hospital on the grounds that then presumably belonged to John Shaw and were sold to Wood in between times?

The first condition of the gift is that “the lands shall for ever …. be used for the purposes of the Hospital only”.

This agreement enabled work to commence on building the Hospital and the foundation stone was laid on 9th December 1882 and the Hospital was opened on 17th July 1884.

The indenture specifically states that

"The name of the institution shall be entitled “The Hospital of Holy Cross” and its object shall be the relief of such poor persons suffering from accident and all diseases not infectious or contagious who reside within the Parish of Rugby and the surrounding neighbourhood."

However by the time the hospital was opened it had become known as the Hospital of St. Cross.

A full transcript of this indenture can be found on this link.

The following note is an extract from a History of the Hospital of St Cross 1884-1984 which was written by members of Rugby Local History Group and published on their behalf by the West Midlands Regional Health Authority. Click on this link to read the full document.

The origins of the name chosen for Rugby's hospital are somewhat confused. There is no such saint as "St. Cross". The Rugby Advertiser for February 18, 1888 reports a meeting at which there was considerable discussion about the use of the title "Hospital of St. Cross", and about the official Trust Deed of 1882 in which it is described as the "Hospital of the Holy Cross". It was stated at that meeting that the title was chosen by the founders, Mr. and Mrs. Richard H. Wood, after the oldest hospital in England - that of St. Cross in Winchester. Why then did Mr Wood put his signature to a deed in which it is described otherwise?

To add to the confusion, there is a report in The Nursing and Midwives Journal of May 27,1911, that the old hospital in Castle Street was also known as "St. Cross", although this is not verified by any other source.

The discrepancy may well be explained by the casual use of a foreign language: the Latin inscribed foundation stone describes the hospital as "Sancte Crucem", which could easily have been colloquialised as "St. Cross". As the foundation stone was laid by the Woods, this adds weight to the argument that the original intention was it should be known as the "Hospital of the Holy Cross".