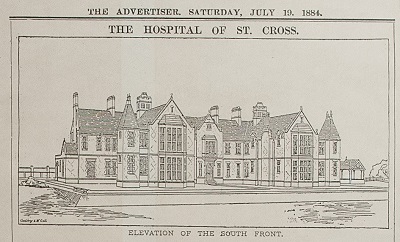 The hospital was opened in July 1884 as the result of the generosity of Richard Henry Wood and his wife Elizabeth. Mr Wood was a wealthy man who came to Rugby around 1874 and donated 3 parcels of land and the funds to build the original building on Barby Road.

An article about the new hospital and the opening ceremony and civic celebrations, which were attended by between 10,000 and 20,000 people, was published in Rugby Advertiser and a copy of the article is on display in the Ocatpus Centre at the hospital. A transcript of the full article is available on this link.

If you would like to hear more about the history of the hospital or the work of The Friends of St Cross from a one of our Roadshow team please contact our This email address is being protected from spambots. You need JavaScript enabled to view it. or ring our office on 01788 663754. 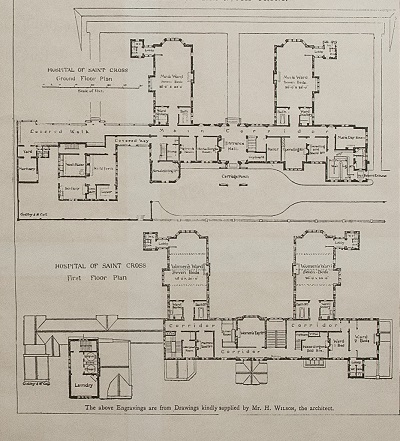 The following description of the original buildings is an extract from the Rugby Advertiser article.

The Hospital of St Cross has been built from the designs of Mr. Henry Wilson, of Grays Inn Square, London, and is intended to accommodate 31 patients. It is situated on an elevated site, ten acres in extent on the east of Barby Road.

The building, of red brick with [black] stone dressings, and roofed with green Westmoreland slates, is in the late domestic Gothic style. It is approached from the high road by a private drive, and the grounds are entered by gates leading into a courtyard. From whatever point the structure us viewed it presents a most pleasing contour – and this is especially the case when the observer takes his stand on the Barby Road, at any spot from whence the hospital can be seen. On is struck with the substantial and imposing appearance presented, while the admirable grouping of many handsome windows and the free use of stone dressings, gives a degree of lightness and elegance seldom attained in public buildings.

The main entrance is from a covered open-timbered carriage porch, of very handsome proportions, which opens direct into the entrance hall. On the right of this, and seen through arches, is the principal staircase, rising by easy stone steps to the first floor, the staircase having a light iron balustrade. Over the central arch in the hall a marble tablet records the date of the foundation in the following words:-

On the east side of the hall, over the fireplace, is a tablet on which is inscribed the names of the benefactors of the hospital, and which we hope may soon require to be enlarged. From the hall a wide corridor conducts us east and west, and on the north side are arranged the principal rooms for the administration – i.e., rooms for house surgeon, matron, committee and nurses. The operating room is on the north side, and is in convenient proximity to the accident ward. It is well lighted and fitted with all the requisite appliances, and with hot and cold water. At the west end of the corridor are the men’s convalescent room and the out-patients department. This latter has its door nearest to the entrance gates, over which is carved the ancient motto ‘post tenobras spero lucem[2]’ and consists of a spacious waiting room with an arrangement of seats by which all crowding and pushing is avoided, and by which means every patient is sure of reaching the doctor in his proper turn. The out patients leave the consulting room by another gangway, passing the dispensary on their way out. On the south side of the main corridor are the two pavilions, containing the principal wards. These project from the main block at right angles, and have a free circulation of air around three sides. Each pavilion consists of two wards one on the ground floor and one above, it being intended, when the hospital is at its full strength, that the ground floor shall be kept entirely for men, and the upper floor for women.  Each of the four principal wards (which are all exactly alike in arrangement) is constructed for seven patients. They are lofty apartments, each being complete in itself, being provided with a bathroom and lavatory, a nurses scullery fitted with range, dresser, hot and cold water, and [filter]; and also with a w.c. and slop sink, placed in the tower at the south end, and being cut off from the wards by a lobby, having large windows for cross ventilation. The wards are heated by large grates, having a supply of fresh warmed air supplied at the back, and this is supplemented by hot water coils, the cases of which are to easily remove for cleaning, and which also have fresh air supplied at the back. The vitiated air is removed by ventilators near the ceiling, which leads to the two turrets on the roof. The floors are of oak, wax polished, and all angles are rounded to prevent the lodgement of dust. On the first floor, besides the women’s convalescent room and bedrooms for the house surgeon and matron, linen room and waterproof store, are two small wards containing one and two rooms respectively.

These are shut off from the main corridor by a swing door, and are intended for the isolation of certain cases. They are provided with sink, etc., cut off by a ventilated lobby. On the top floor ample provision is made for nurse and servants, and rooms are arranged for a man close to the house surgeon’s bedroom, and approached by a separate staircase. At the east end of the main corridor on the ground floor is a covered walk, which faces due south, and is protected from cold winds. This walk is on a level with the ground floor so that patients can be wheeled out in their beds, should they be unable to walk, without any difficulty. The kitchen and laundry occupy a separate block at the end of the building being cut off by a passage, so that no smells of cooking, &c., can get to the portion occupied by the patients. The block contains a lofty kitchen with larders and scullery, and a wash-house on the ground floor with troughs, copper, and separate hot water service. On the upper floor is a laundry with drying closet. At the end of the covered walk, and cut off from it, is the mortuary, which is fitted with the necessary conveniences for post mortem examinations. The basement floor contains the usual store-rooms, coal cellar, meter room, and the warming apparatus.

Throughout the building the most complete means have been taken to secure thorough ventilation and plenty of light, while every care is taken to provide for the due comfort of the patients. In the wards the windows and ventilators are arranged to open so as to give the air free course round the room, at the same time to prevent draughts upon the patients. The internal sanitary arrangements are so devised that the most perfect cleanliness can be secured, white glaze bricks being used for the walls, and tiles for the floors, while the water fittings are of the most approved kind, and are waste-preventing. Although artificial warmth is generally supplied by hot water pipes, the patients and officials will not be deprived of the “cheerful hearth,” all the wards and most of the rooms having fire-places, with suitable chimney pieces and ornamented with tiles. All the exposed internal woodwork is of varnished pitch pine or [deal], except the kitchen and laundry offices where it is painted stone colour. A cheerful tone is given to the light admitted through the numerous windows by a judicious  intermingling of lightly tinted glass; and the three top lights of the fine south window of the main staircases are filled in with the coats of arms of the respective families of Mr. and Mrs. Wood (Wood and Hatton), and the badge of St. Cross – a croes potent, the motto being “sub hoc signo vinces”[4]. The latter badge is also skilfully worked in at several points inside and out of the building. The ground floor of the entrance hall and corridors of the ground floor are paved with red and black tiles, while the upper passages are laid with linoleum. The bell communication is by the ordinary crank system, and speaking tubes proceed from the wards to the passage near the kitchen; and an easily worked lift passes from the basement to roof for the convenience of food, stores, &c.

It was the original intention of Mr. Wood to leave the furnishing of the hospital to the town, but the wish did not become known, and consequently no steps were taken. A sum of about £600 having, however, accumulated upon the endowment fund, Mr Wood decided to apply that as far as it would go in purchasing furniture. The ward beds will be uniform throughout, the bedsteads being of substantial iron, painted chocolate, with the usual fittings to enable patients to raise themselves in bed, having Charlton and Dugdale’s patent excelsior wire spring mattresses. By the side of each bed will stand a polished pitch pine locker for the use of the patients, and which can also be used as seats by visitors. The whole of the crockery will be of uniform pattern and will bear the badge of St Cross.

The drainage is arranged according to the latest ideas on sanitation, all sinks, baths &c., being disconnected. The foul drains are laid in perfectly straight lines, a large brick manhole being placed wherever a bend occurs, and the drains running through these manholes in half or channel pipes, and any stoppage or defect can be immediately found out and rectified. The rainwater finds its way by downspouts to Doulton gullies at the base of the building, and a portion of it then goes to a cistern in the yard, the remainder passing away to the water course in the Barby Road. The foul drainage falls by the above-mentioned system to a filtering tank at the bottom of the field in front, where it will be thoroughly and effectually dealt with. Provision is made in case of fire by hydrants outside the building and by taps, to which hose can be attached, opposite the door of each ward, these being supplied direct from the town main.

The works have been satisfactorily carried out by Messrs. Parnell. Mr. S. T. Fletcher was Clerk of the Works.

Only a small portion of the ten acres of land given with the hospital has been laid out, and that merely as a grass covered terrace with gravel paths, wherein the convalescents can seek fresh air and exercise. The remainder of the land will be grazed, it being considered undesirable that the income should at present be burdened with the cost of keeping up an elaborate garden.

[1] The year of incarnation of our Lord 1882. This building was constructed Holy Cross Hospital Richard Henry Wood and his wife Elizabeth our Founders.