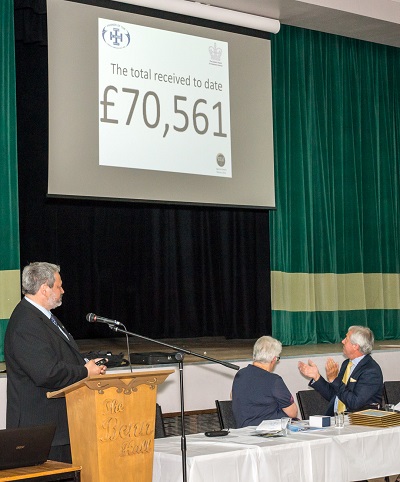 The AGM received an update on the Appeal and the project as well as the Charity's Annual Report.

David Moon, Chief Finance and Strategy Officer, UHCW NHS Trust said “plans have been finalised for the new blood taking facilities at St. Cross and work will start in July. The scheme will see the service moving to the former Mulberry Ward. Eight cubicles will be provided, doubling the present number, and thereby improving the flow of patients through the department which will have its own entrance from dedicated car parking. The scheme will include a small support laboratory which will assure the quality of samples before they are sent for analysis. Building work should be completed by the end of September so that the new facility will be open for patients early in October.”

Click here to see the latest floor plan for the new unit.

Welcoming the news, Friends President, Joan Jesson said “This is really excellent news in our Diamond Jubilee year. We have already committed £100,000 to the funding of the refurbishment element of the project which will see a big improvement in the facilities available for patients. The Blood Taking Service now sees 76,000 patients a year and is a very busy department and this new area will be most welcome for staff and patients.”

The charity’s Vice Chairman, Willy Goldschmidt reported the progress of the Diamond Jubilee Appeal which has now received over £70,000 towards the project with more promised with events planned through to the end of the Jubilee Year.  He said “a key aim of the Appeal has been to widen the charity’s engagement with the community and we have been delighted with the support we have received from businesses, other charities and community organisations as well as the numerous individual donations, large and small, which account for approximately half of the total received to date. The popularity of Chairperson Heather Green’s idea for people to collect 5p pieces has been outstanding. Over 36,000 5 pence pieces have been deposited in the tubes in Blood Taking and Out Patients and that alone amounts to over £1,800. Thanks to all our supporters and the local media who have publicised the Appeal.”

Willy also highlighted that many equipment donations have been made since the launch of the Appeal and expressed special thanks to the Rotary Club of Rugby Dunsmore who have donated over £5,000 to the Appeal and to former Mayor, Councillor Ramesh Srivastava, who presented a cheque for £5,150 which had been donated to the Mayor’s Charity over the last year.

A well attended meeting at the Benn Hall was addressed by the Mayor, Cllr Richard Dodd who, in thanking the charity for its support of St.Cross which he knows is so dear to the people of Rugby and with which he has strong personal connections.

Guest speaker Tim Cox, Lord Lieutenant of Warwickshire, added his thanks and complimented the charity on receiving the Queen’s Award for Voluntary Service in 2014, the only charity in Warwickshire to do so that year. Mr. Cox went on to describe the role and work of the Lord Lieutenant and then presented Long Service Certificates to 6 volunteers who had each completed 15 years’ service.

A final tribute was the presentation, by the Lord Lieutenant, of a miniature of the Queen’s Award for Voluntary Service to Hospital Manager Juliet Starkey in recognition of the invaluable contribution she had made in preparing the application submitted for the charity to receive the honour and the excellent relationship which the charity has with the hospital. Joan Jesson said “It is a real pleasure to work with the St. Cross management team, which Juliet leads. It is so good to see so many developments of services going on in our hospital which reflect the confidence that the Trust has in the team and their commitment to the people of Rugby.”

The report presented at the AGM is available here.