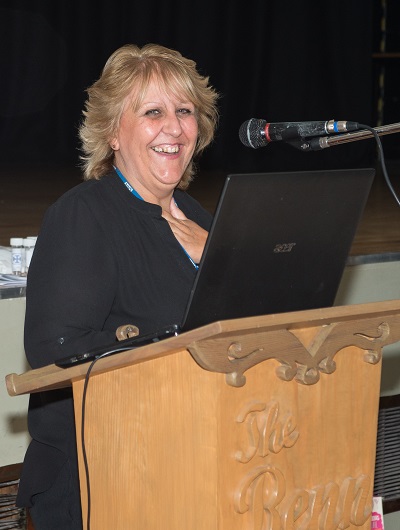 Guest speakers at the Friends AGM, attended by the Mayor of Rugby, Councillor Sally Bragg, spoke of the recent and on-going developments in Dementia Care at St Cross and also about the plans NHS Coventry and Rugby Clinical Commissioning Group (CCG) have for the town.

Debbie Harris, Specialist Nurse mental Health, informed the audience that it is now recognised that approximately one in three people over the age of 65 will suffer from some form of Dementia and the training she provides to help staff identify the reasons why a patient might be confused and how to help patients and their families during their stay in hospital. Debbie thanked the Charity for their support in creating the Bluebell Lounge, where patients can relax in a non-clinical setting and the recently reported donation of the ‘My life’ software and computer which staff have reported has made a real difference for them and the patients. Click here to view the presentation that Debbie gave.

Juliet Hancox, Chief Operating Officer of the CCG, explained the role of the CCG and outlined some of the initiatives that are underway. In particular they are working with NHS England on the provision of a GP surgery in Brownsover and the future planning of GP surgeries bearing in mind the population expansion in the Borough. Juliet also mentioned that they are undertaking initiatives which aim to reduce the pressure on A&E through a review of Urgent Care centres in Rugby and Coventry with the aim of reducing hospital admissions. Other local initiatives are the introduction of a Family Support Worker at 4 local GP surgeries, in partnership with Warwickshire County Council. The CCG is also working with Warwickshire Community and Volunteer Action (WCAVA) on the Connect Well Social Prescribing project through which patients attending surgeries make contact with voluntary organisations which can help the patient adopt healthier life styles.  - click here to view the presentation which Juliet gave, more information about Connect Well can be found in this document.

Willy Goldschmidt, incoming Chairman of the Charity presented the volunteers and supporters with a breakdown of the various ways in which the Appeal had achieved its success. Willy said “this was a tremendous team effort which built on the existing goodwill generated by the volunteers over the years as well as the close working relationship that the Charity has with the Hospital Management. What is great news is that the Charity is continuing to receive donations of 5p pieces and other individual donations. We have also heard that a group of supporters will be taking part in the Wolf Run and possibly other sponsored events and that both organisations that supported the Appeal are continuing to raise money for the Charity and new ones are joining in as well!” Click here to view the presentation that Willy gave.

David Eltringham, Chief Operating Officer of the UHCW Trust, thanked the Charity for their support over the past year and reported that the Friends Blood Taking Unit continues to achieve high standards of service for an increased volume of patients. He reported that work on a new car park has been completed and that plans are underway to expand the opening hours of the service and to introduce an option for patients to book appointments for blood taking which will be given priority during busy times. David also confirmed that plans to make some chemotherapy treatments available at St Cross were progressing well and that it is hoped the new service will be available by the end of the year. 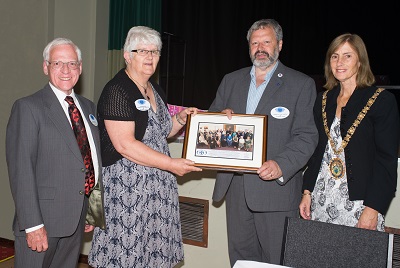 Mike Rigby, Vice President of the Charity, chaired the proceedings and, together with the Mayor, Councillor Sally Bragg, presented Rita Holdsworth with a Life Membership certificate in recognition of her 15 years of service at the Tea Bar in the Out Patients Department. Rita has shared shifts with 5 other Tea Bar volunteers over the years and was thinking of resigning later this year. However she has promised to rethink this as she enjoys her time on the Tea Bar.

At the end of the meeting Willy Goldschmidt presented Heather Green, the retiring Chairperson, with a photograph taken when the Charity received the Queens Award for Voluntary Service as a memento of her 4 years of service as Chairperson of the Charity during which there had been a Royal visit to the hospital and the Friends had received two awards at the Pride of Rugby celebrations as well as commemorating the Diamond Jubilee of the Charity with the highly successful Appeal.