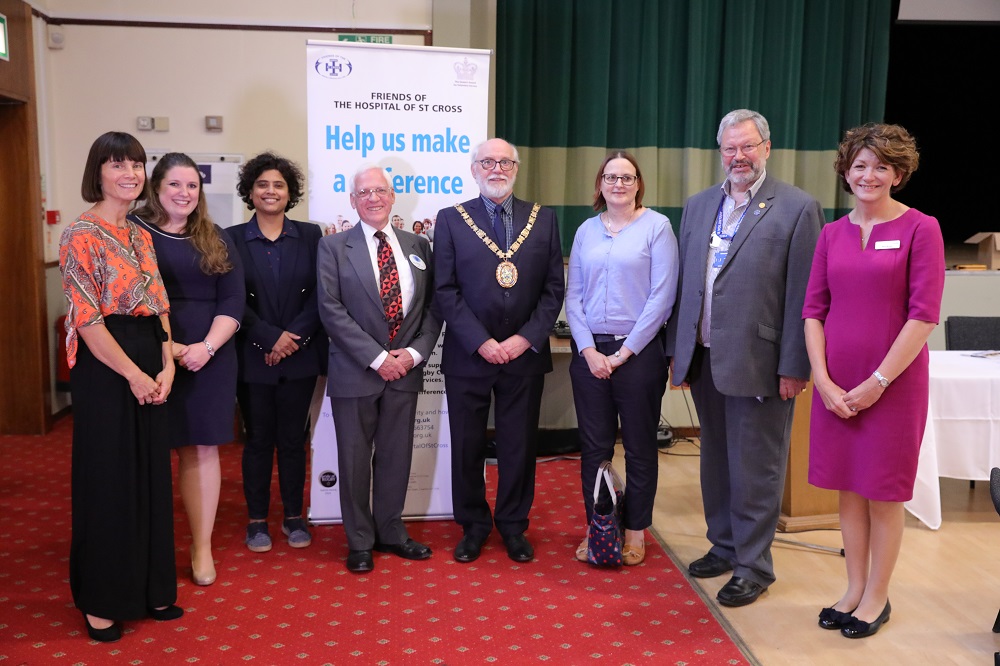 The 64th ANNUAL GENERAL MEETING of the Friends of the Hospital of St. Cross was held on Wednesday 26th June 2019  in the Benn Hall, Newbold Road, Rugby.

Our guest speakers, pictured with Mike Rigby and Willy Goldschmidt, President and Chairman of the Friends respectively were:-

Links to the various presentations are included in the report below.

After the opening formalities of the AGM were concluded Mike invited our first Guest Speaker, The Worshipful Mayor of Rugby – Cllr. William Lewis to address the meeting. The Mayor thanked the charity for the work that we do and asked for an opportunity to visit the hospital in the autumn. He also said that he planned to come the Cuban and Country Fusion event in November.

Willy Goldschmidt thanked the Mayor for his kind words and then presented the Chairman’s report for 2018 which highlighted some of the donations of equipment and support for projects that had been made during the year. He also thanked the community for the support which had made this possible and then went on to acknowledge the diverse way in which the community had volunteered to help make a difference around the hospital.

David Roberts then delivered the Financial Report for 2018 and highlighted that donations of equipment and support for projects in the year totalled £230,282 – almost exactly double the total for 2017. Financial donations to the Charity for the year were also a record at £305,122 as a result of receipts from a number of unusually large legacies. This has enabled the Charity to set aside £200,000 to support a major project which we hope to announce in the Autumn and will be delivered in partnership with the UHCW Trust and the UHCW Charity!

The highlights of the evening were presentations reporting on the progress of two of projects supported in 2018 and a presentation about "How Research is changing the NHS".

The first report was given by Michelle Goodlad, Principal Sleep Physiologist, UHCW Trust who reported on the progress of the Complex Sleep Studies Unit which the Friends had supported with a donation of £80,000 beds, equipment and support for the construction of the unit. Since the unit opened in November 2018 the team have undertaken 73 in-patient studies and have just started undertaking a new out-patient service. Michelle outlined her plans to provide an increased range of diagnostic sessions and to team up with Warwick University and other sleep study units to undertake research into sleep disorders.

The second report was given by Dr Molly Maitra, Consultant Obstetrician & Gynaecologist, and Kara Marshall, Group Director of Operations, Women & Children’s, both from UHCW Trust. The ladies reported on the first 6 months of the Hysteroscopy Diagnostic Service which was supported by a donation from The Friends of £82,000 which was used to purchase a special patient couch and the scopes required for the examinations. To date 74 examinations have been successfully performed. 72% were for patients from Rugby. The remainder travelled from as far afield as Bedford, Birmingham and Nottingham! Kara shared lots of anonymised positive feedback from patients.

Immediately prior to the AGM, the Friends Board approved a request to purchase a set of treatment hysteroscopes so that the service can deliver both diagnostic and treatment services. Dr Maitra is the first in the UK to trial the new scopes which she believes will be easier for patients to tolerate during the procedure. It is hoped that the new service will be available in August. There are also plans to recruit an additional consultant and to enable GPs to make direct referrals to the service.

Nina Morgan, Chief Nursing Officer of UHCW Trust then gave a vote of thanks to the Friends for all the voluntary work and support for these projects that the Friends have provided.

Ceri Jones, Head of Research and Development at UHCW, gave an entertaining and highly informative talk about the importance of research in the NHS. Ceri opened her talk with the information that research has shown that “research-active” Trusts have better patient outcomes than those that are less active. She then went on to let the audience know that last year over 5,000 patients took part in more than 400 research projects and the research team published 170 papers.

Ceri then went on to explain how long it is before a new drug is licensed for use in the NHS giving an example of one case where the process took 8 years. She also mentioned how the use of artificial intelligence to screen samples is speeding cancer diagnosis. The audience was entertained when Ceri recounted that many heel injuries occur when men fall off ladders while hanging the Christmas lights. Research has found that surgery provides no benefits in dealing with these injuries when compared to stabilising the injured heel in a cast or surgical boot and therefore patients no longer undergo surgery for this type of injury.

Lastly, Ceri reminded those that had attended the AGM in 2018 that St Cross is a leading centre for research into Trauma and Orthopaedic procedures. There is also a significant volume of research undertaken in the Macular Unit and of course the new Complex Sleep Studies unit will have a strong research focus.

During the course of the evening the President, Vice Presidents and Trustees of the charity were elected as in the list of nominations below.

At the end of the meeting the Mayor of Rugby, Councillor Bill Lewis, presented a Life Member certificate to Valerie Naylor, one of our long serving volunteers, and flowers to two members of the team at St Cross, Karen Tomlinson and Juliet Starkey, who have worked so successfully with the Friends over the past year.  Unfortunately 4 other long serving volunteers were not able to attend the meeting and will receive their certificates in due course.