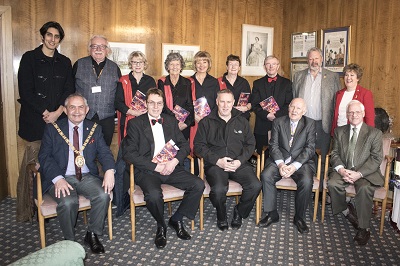 Members of the Rugby Philharmonic Choir and the Jaguar Land Rover Band were invited to meet in the Mayor’s Parlour to announce plans for the Gala Proms Charity Concert which will be held at 7pm in the Temple Speech Room on the 23rd February.

Half of the proceeds will be donated to the Friends of St Cross and the remainder will be distributed amongst local charities supported by the Rotary Club of Rugby Dunsmore which include SSAFA the Mayor’s Charity.

The programme for the evening will feature a number of popular items including music by John Rutter, Bob Chilcott, Stephen Sondheim plus Cole Porter will be performed - plus some well - loved Classics in conjunction with the JLR Band concluding with a Last Night of the Proms finale which will of course be a sing-along opportunity for the audience of 600 people!

Willy Goldschmidt, Chairman of the Friends of St Cross said “This will be the third Gala Concert we have promoted in partnership with the Rotary Club and we are confident the concert will be another sell out success so would encourage all our supporters to buy their tickets soon in order to avoid being disappointed. We expect to raise the roof with a fantastic evening of entertainment and hope to raise a similar amount to the £8,000 achieved for our two charities in 2017. We are grateful to Lime Tree Retirement Village for their sponsorship of the concert which has underwritten the costs of arranging the event.”

Mike Folly, Fundraising Chairman of the Rotary Club of Rugby Dunsmore, said “The Rugby Philharmonic Choir has a tremendous reputation and following in the town and of course the Jaguar Land Rover Band is acknowledged as world-class!  This will be a fantastic evening of top class music for all tastes not to be missed. There is nothing like the sound over one hundred singers and this amazing band to up lift an audience in this wonderful venue”

Mervyn Bethell, Musical Director of the Rugby Philharmonic Choir said “we are delighted to have been invited to team up with the Jaguar Land Rover Band and support such great local fundraising organisations as the Friends of St Cross and Rugby Dunsmore Rotary Club.”

Simon Archer, Band Manager for the Jaguar Land Rover Band said “the Band had a great time when we came to Rugby in 2017 and are looking forward to raising the roof again in February.”

Tickets costing £12.50, when bought in advance, are on sale at the Rugby Visitor Centre and the Tea Bar in Out Patients at the Hospital of St Cross as well as from members of the Rotary Club and the Trustees of the Friends or online or through the Friends, Rugby Dunsmore Rotary Club and Rugby Philharmonic Facebook pages.

Photo: The Mayor of Rugby met members of the Rugby Philharmonic Choir, Jaguar Land Rover Band and representatives of the Rotary Club of Rugby Dunsmore and the Friends of St Cross in the Mayor’s Parlour