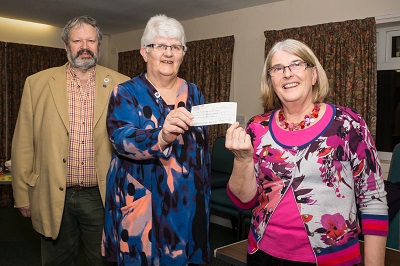 It is with regret that the Friends of St cross report that Heather Green has sadly passed away.

Heather was a loyal and dedicated servant to both the NHS and the Friends of St Cross.

She served in the NHS as a radiographer and came to Walsgrave in the 1970s before transferring to the Hospital of St Cross where she held the position of Superintendent Radiographer until she retired and joined the Friends as a Trustee in 2007 taking on the role of Help Desk Volunteer Co-ordinator.

She was Chairperson of the Friends from 2013 to 2016, when the group was recognised nationally with the Queens Award for Voluntary Service and locally with a Special Award at the Pride of Rugby.

Heather launched the highly successful Friends Diamond Jubilee Appeal in 2014 with the suggestion that supporters collect and donate 5p pieces. Over 45,000 5p coins were donated!

On stepping down from the Chair she took on the role of the Tea Bar Service Volunteer Co-ordinator.

Heather's family will hold a private committal prior to a service which will take place at Long Lawford Methodist Church, in School Street, at 10.30am on Friday, March 22.

The family has asked that any donations made in Heather's memory go to the Friends of St Cross.

Photo: Heather (centre) receiving one of the last donations to the Friends Diamond Jubilee Appeal