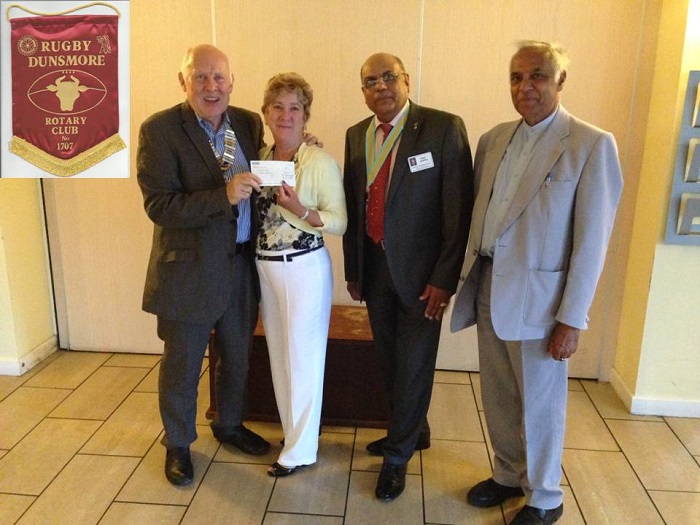 President Mike Hutton presented a cheque for £2,000 and members of the group have suggested various ways in which they will continue to support the Friends.

Mike Hutton, the President of Rugby Dunsmore Rotary Club for 2013-14, said that he selected The Friends as his Charity of the Year because “St Cross is a valued essential part of Rugby town and really merits the support of all the citizens and the Rotarians”.

Following on from the Spring Fayre, members of the club have held a Golf Day in aid of the charity and have invited the community to run in aid of The Friends in the Run for Rotary event at Draycote on the 28th of September, adults can enter a 10k run and kids run for free in a 1km fun run or 2km cycle ride.

Mike is pictured presenting the cheque to Kathryn Lawrence, a member of the Main Committee of The Friends, and is accompanied by Paul Jaspal, Rotary District Governor elect who was visiting the Club for the evening, and Ramesh Srivastava the newly elected Mayor  of Rugby, who is also member of Rugby Dunsmore Rotary Club.