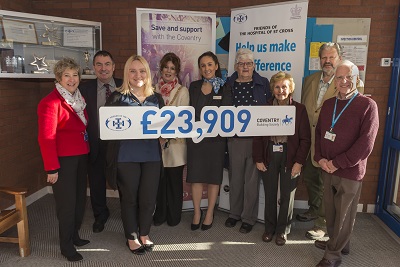 This is the eleventh donation which the Society has made and is based on 1% of the average savings balances held in their accounts which support the Friends of St Cross over a 12 month period. The cheque this year was for a massive £23,909 taking the total that the Friends have received this way to an amazing £216,293.

Willy Goldschmidt, Chairman of the Friends of St Cross, said “We are most grateful for the support we have received from Coventry Building Society over the years. This year’s donation is the second highest we have received from the Society and is an increase of £3,250 on last year’s donation which must be, to a large extent, down to the team at the branch in Rugby, and we would like to thank them especially for their support.

This donation will help buy additional equipment that will improve the care provided to patients. In 2017 we spent approximately £115k and have already committed a further £95k for projects which we expect to be delivered by the Trust at St Cross in 2018. Of course we could not do this without the tremendous support we receive from the community in and around Rugby.”

The cheque presentation was combined with the draw of the Christmas Raffle which was conducted by the Mayor of Rugby.

Before the raffle draw and cheque presentation, the Mayor, representatives from Coventry Building Society and James Pak, of Jamesway Travel, who donated the top raffle prize, were taken on a tour of areas of the hospital where equipment donated by the Friends in the last year are in use. Rebecca Brookes, Savings Product Officer at the Society, said “We were delighted to come along today and present this year’s donation to the Friends of St Cross. At Coventry Building Society, we strive to support our local communities so it’s fantastic that with the help of our members, we’re able to support the important work of the Friends of St Cross”.

Photo by Eddie White - Representatives of Coventry Building Society present the donation to Trustees of the Friends of St Cross who were accompanied by the Mayor of Rugby and James Pak of Jamesway Travel.