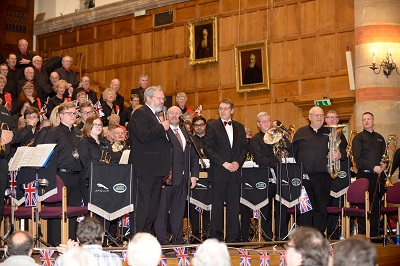 The Rugby Philharmonic Choir and the Jaguar Land Rover Band gave a fabulous performance at the 3rd Gala Charity Concert organised by the Friends and the Rotary Club of Rugby Dunsmore.

The event was held in the magnificent Temple Speech Room and the programme for the evening included a wide range of music to suit all tastes with outstanding contributions from soprano Emma Griffiths and organist Dr Richard Dunster-Sigtermans.

Simon Archer, Jaguar Land Rover Band’s Band Manager said “it was an honour and a pleasure for the Band to perform in Rugby again and to support such great causes.”

Mervyn Bethell, Musical Director of the Rugby Philharmonic Choir, said “Everyone enjoyed the performance and the collaboration with the Jaguar Land Rover Band was a great new experience for the Phil.”

Willy Goldschmidt, Chairman of the Friends of St Cross said “The feedback from the audience was terrific and we raised over £4,000 for the Friends of St Cross and the charities supported by the Rotary Club of Rugby Dunsmore. We are grateful to Lime Tree Retirement Village for their sponsorship of the concert which underwrote the costs of arranging the event.”

Photo: by Jamie Gray Photography – The performers acknowledge the applause from an appreciative audience.