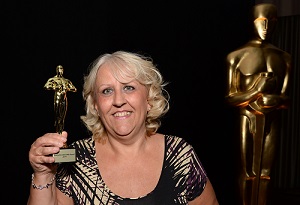 The superb work that the whole team at St Cross does for patients was recognised at the University Hospitals Coventry and Warwickshire Outstanding Service and Care Awards Celebration (the OSCAs) held in Coventry on the 19th of September.

Specialist Nurse in Mental Health, Debbie Harris received two awards - the Going the extra mile for patients Award and the Chief Executive Officer’s Award as a member of the Frail and Older People’s Team.

Juliet Starkey, the Group Manager at the Hospital of St Cross and the Cardiac Rehab team were also nominated for awards and while they did not win they received great support from their peers on the night.

Debbie initiated and drove the project, which The Friends supported, to create the Bluebell Lounge which was opened in May and is designed for patients with confusion and/or dementia, their relatives, carers and accompanying staff members to come and take time out.