Friends win Team of the Year at Pride of Rugby Awards 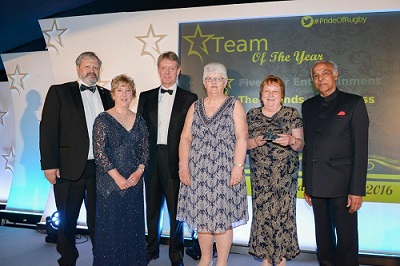 In accepting the award, Willy Goldschmidt, Vice Chairman of the Friends said that “two years ago the Charity was honoured in quick succession with a Special Award at the Pride of Rugby Awards and then the Queen’s Award for Voluntary Services – equivalent to an MBE for Volunteer Groups. The Charity then went on to launch its highly successful Diamond Jubilee Appeal which raised more than double its target and helped fund the relocation and re-equipping of the Friends Blood Taking Unit which is now receiving wide praise.

Since it opened the new service has been used over 33,000 times by at least 25,000 individual patients – up over 20% on the numbers attending in October and November. The success of the Appeal and the project has been a tremendous team effort with support coming from the local media and from across the community as well as from the Hospital Management and the staff of the Friends Blood Taking Unit. A very big thank you to all involved.”