Savers and Coventry Building Society combine to donate to the Friends 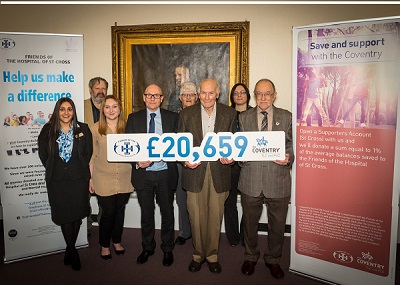 For the past ten years, the Society has made an annual donation based on 1% of the average savings balances held in accounts which support the Friends of St Cross for the previous 12 months. The cheque this year was for a massive £20,659 taking the total that the Friends have received this way to an amazing £192,384.

Willy Goldschmidt, Chairperson of the Friends of St Cross, said “We are most grateful for the support we have received from the Coventry over the years. They not only operate accounts which support our Charity, but have also helped us with the design and printing of our newsletters. The size of the donation this year is £2,496 more than last year which means that the community has given even more support for the hospital and the Charity through accounts which support us. This donation will be placed in the general funds of the Charity which will ensure that we can continue to make a difference through donations of equipment which improve the patient experience, while we carry on raising money for the Sleep Studies project we announced earlier this month.”

If you like the idea of the Coventry BS helping the Charity then the Supporters Account (St Cross) could be the perfect savings account - find out more here. 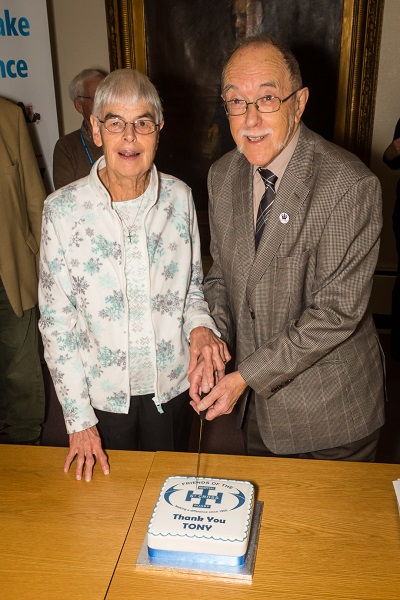 The cheque presentation was combined with a tribute to Tony Cousins who recently retired as a Trustee of the Charity, though he continues to serve as a volunteer. Willy Goldschmidt presented Tony with a photo-frame containing pictures of Tony at various Friends events said “Your contribution to the Charity over the last 18 years has been immense. Your initiatives in establishing the relationship with the Coventry, your suggestion that the Diamond Jubilee Appeal fund the project to relocate the Blood Taking Unit and the creation of the Book Sales service are obvious examples. It is only fitting that you and Tony Hill, your fellow trustee of the time and who joined you in the dialogue with the Coventry which led to the creation of the accounts they offer in support of the Charity, are here to see the fruits of that endeavour.”

After the presentations, the representatives of the Coventry were taken on an escorted tour of areas of the hospital where equipment donations from the Friends made in the last year are in use. Darin Landon, Distribution Director for the Coventry said “We were delighted to come along today and present this year’s donation to the Friends of St Cross. At the Coventry, we strive to support our local communities so we’re very pleased that with the help of our members, we’re able to donate such a large amount to support the fantastic work of the Friends of St Cross”.

1. Representatives of the Coventry present the donation to Trustees of the Friends of St Cross and the General Manager of the hospital. L-R:  Alysha Patel, Willy Goldschmidt, Rebecca Brookes, Darin Landon, Heather Green, Tony Hill, Juliet Starkey and Tony Cousins.

2. Stella and Tony Cousins cut a cake to mark Tony's retirement as a trustee of the Charity