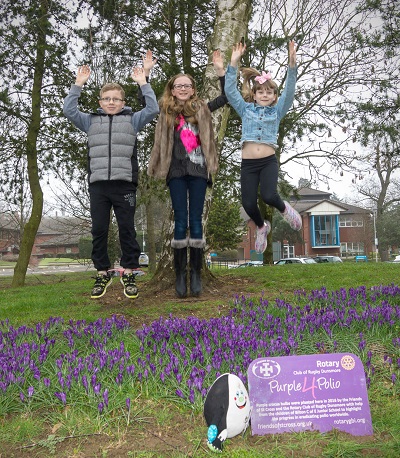 Pupils from Bilton C of E Junior School returned to the hospital to see the bulbs they planted last October in full bloom and to plant a commemorative plaque!

Alex Norton, Head Teacher at the Junior School said, “'We are so proud to have been involved in planting bulbs for this very worthy cause. We have some purple bulbs at school too!'

The pupils were joined by WCAVA’s mascot Ellis and representatives of the Friends of St Cross and the Rotary Club of Rugby Dunsmore.

Willy Goldschmidt, Chairman of the Friends of St Cross, said “it was lovely to meet up again with Alex Norton and some of the pupils and their parents who helped bring this splash of colour to the entrance to the hospital grounds.”

Tony Mennell, President Elect of the Rotary Club of Rugby Dunsmore said “Polio is a crippling disease and for over 30 years, Rotary International and its members have been committed to fighting to eradicate polio across the world. The number of polio-endemic countries has dropped from 125 to just three (Nigeria, Pakistan and Afghanistan), with over 2.5 billion children receiving vaccinations thanks to the help of Rotary.

With eradication now closer than ever, Rotary International in Great Britain and Ireland’s latest campaign, Purple4Polio, is designed to unite communities to engage in activities as part of the final push to eradicate polio for good. Earlier in the week, we were delighted to meet up with children and staff from Dunchurch Infant School who came to see a commemorative plaque placed by the crocuses they had planted by the Dunchurch Road. This was a great joint community initiative.”