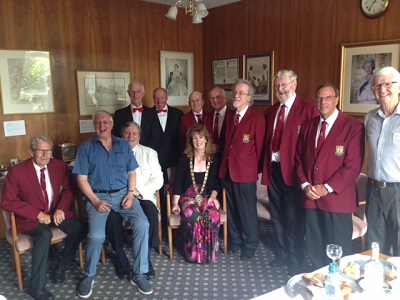 The Concert will be held at 7pm in the Temple Speech Room on the 29th of July.  The Mayor is the President of the Rugby Male Voice Choir and the concert is being organised by the Rotary Club of Rugby Dunsmore and Friends of St Cross. Half of the proceeds will be donated to the Friends of St Cross and the remainder will be distributed amongst local charities supported by the Rotary Club of Rugby Dunsmore.

The programme for the evening will feature a number of popular items from musicals and other hits concluding with a Last Night of the Proms finale which will of course be a sing-along opportunity for the audience of 600 people!

Mike Folly, Fundraising Chairman of the Rotary Club of Rugby Dunsmore, said “I was delighted when, following Mike's decision to retire from his role as RMVC Musical Director, he asked if the Rotary Club would organise his last event. We thought it would be great to join again with the Friends of St Cross and attempt to provide a similar programme to the event we so successfully hosted together in October 2015 to send Mike off with a "Bang". So the Rugby Male Voice Choir will combine with the City of Coventry Male Voice Choir, the Royal Naval Association of Leamington Male Voice Choir and the Northampton Male Voice Choir. This time they are joined by the internationally renowned Jaguar Land Rover Band and will be performing along with soloist soprano Mel Cotton.”

Mike Minton said “I have been the Musical Director of the Rugby Male Voice for some seventeen enjoyable years and have decided that it is time I passed the baton on to a new MD. Each part of the concert will end with all the choirs and the band performing together and we hope to send everyone home on a high!”

Dave Lea, Musical Director of the JLR band said “we love doing charity concerts and it is a long time since we gave a major performance in Rugby so we are really looking forward to this event. We will play a number of bold and loud numbers and possibly include an item that has been specially written in memory of those who lost their lives in the Manchester disaster.”

Willy Goldschmidt, Chairman of the Friends of St Cross said “We are confident the concert will be a sell out success so would encourage all our supporters to buy their tickets soon in order to avoid being disappointed. We expect to raise the roof with a fantastic evening of entertainment and hope to raise a similar amount to the £7,000 achieved for our two charities in 2015.”

Tickets costing £12.50, when bought in advance, are on sale online or at the Rugby Visitor Centre and the Tea Bar in Out Patients at the Hospital of St Cross as well as from members of the Rotary Club and the Trustees of the Friends.

Photos: members of the Rugby Male Voice Choir and City of Coventry Male Voice Choir meet the Mayor of Rugby, Dave Lea (of the Jaguar Land Rover Band) and representatives of the Rotary Club of Rugby Dunsmore and the Friends of St Cross in the Mayor’s Parlour and on the Council steps.