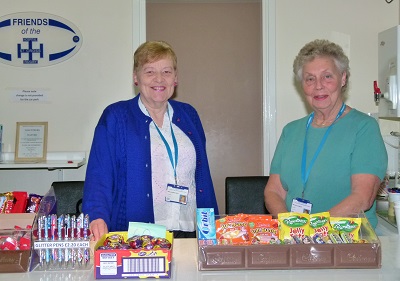 Maureen West and Sally Bishop have been volunteers with the Friends of St Cross for over fifteen years and are due to be recognised for this at the Charity’s AGM in June 2015. Like so many of our volunteers they regard the work they do as a way of giving back to the hospital which has done so much for them and their families.

Since 1980 Maureen was a volunteer visitor at St Luke’s Hospital, which has long since gone from Lower Hillmorton Road.  When St Luke’s closed she continued to visit Oak Ward at St Cross and joined the team at St Cross in January 2000. She not only does one shift a month in the Tea Bar but does the occasional shift covering for others and also helps with the cleaning and tidying of the St Elizabeth Chapel in the hospital. Three years ago Maureen had surgery for breast cancer and says that she finds that volunteering at the Tea Bar is very therapeutic as she enjoys meeting people and the work helps her to maintain a positive outlook.

Sally was recruited by veteran Mary Lock, who is one of Sally’s neighbours and recently celebrated her 92nd birthday! Ever since then Sally and Mary have done a regular shift on the Tea Bar and were two of the guests of honour when the Charity was presented with the Queens Award for Voluntary Service last September. Last year Sally organised a coffee morning in support of the Diamond Jubilee Appeal and raised a fabulous £217.