The Coventry Building Society have been our Corporate Patrons since 2006.

During that time they have supported us in many ways - the most significant of those being the operation of the St Cross Saver Account and the Supporters Account (St Cross).

The Coventry have also kindly designed and printed our newsletters since November 2012 and have designed various signs, banners and posters which have helped promote the work that we do.

For the past eight years the Coventry has annually donated a sum equal to 1% of the average balance value of the total held in St Cross Saver accounts and the cheque this year was for an impressive £18,163 taking the total that the Friends have received this way to an amazing £171,725.

Sainsbury's Local choose us as their charity of the year 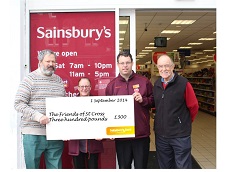 Sainsburys Local in Clifton Road has selected The Friends of St Cross as their charity of the year. Store Manager Gary Cartwright said that “colleagues at the store unanimously chose to support The Friends from a wide selection of charities nominated by store customers. We will be organising several events during the year and hope to raise over £1,000 to support The Friends Diamond Jubilee Appeal.”

The store team has already made a successful request for support from the Sainsburys Community Budget and colleagues Sharon and John are pictured presenting a cheque for £300 to Tony Cousins, Vice President of The Friends and Willy Goldschmidt, Communications Lead.

The store has donated a 22" Colour TV for The Friends Christmas Raffle and have collection tins and a cylinder by the tills – so if supporters want to deposit coins collected at home they can do so easily when they are in town rather than having to come to Out Patients or Blood Taking at St Cross! 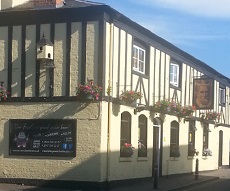 The Merchants Inn has nominated the Friends as the main charity that their customers will support with a variety of events throughout the year. They have started by donating the entry fees for the quiz night they hold on at 8pm on the last Monday of the month and ran a 'name the teddy' fundraiser at the July quiz. 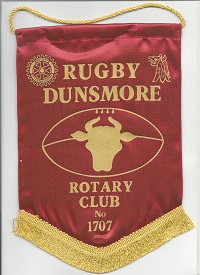 President Mike Hutton presented a cheque for £2,000 and members of the group have suggested various ways in which they will continue to support the Friends.

James Pak present an initial donation of £500 and has also provided travel vouchers for future raffles and auctions. He has a variety of ideas which will be reported as they develop.