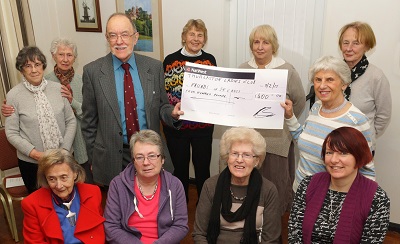 Members of Thurlaston Ladies Club invited Tony Cousins from the Friends of St Cross Roadshow team to their village church hall to be presented with a cheque for £400 towards the Diamond Jubilee Appeal.

Anne Boulton, who is a former radiographer at St Cross, told Tony that the group is celebrating its golden jubilee this year and likes to support local charities. They raise money by holding monthly raffles at their meetings to which they often invite speakers to talk about a wide variety of topics. Members also donate a £1 at each meeting they attend and in October they held a Bring and Buy event. At the end of the year the members make suggestions as to which charities should receive the money raised during the year.

On hearing about the charitable tradition of the Club, Tony gave a short talk about the history of the hospital which was opened in 1884 thanks to Richard Wood’s donation, of land, the original building and an initial trust fund, which was equivalent to £13m in today’s money. The hospital continued to depend on charity until the formation of the NHS in 1948. It was not long after that until it was recognised that hospitals needed the continued support of volunteers and charitable donations from grateful patients and their families because then, as now, the country could not afford everything it would like to have in its hospitals.

Since its foundation in 1955 The Friends of St Cross has donated a wide variety of equipment and supported projects spending in excess of £3.1m over the years.  As has been reported, the Charity encourages requests for equipment which is over and above the essential and either improves the patient experience or helps bring services closer to the people of Rugby.

Click here to find out more about the early history of the hospital or email This email address is being protected from spambots. You need JavaScript enabled to view it. to arrange a free roadshow.