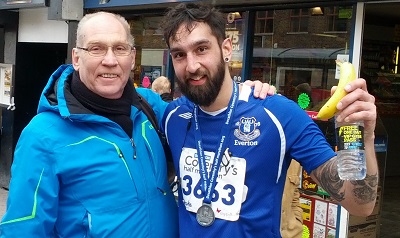 Father and son Les and Lee-Anthony New have teamed up to raise money for the Friends Diamond Jubilee Appeal.

Les started running two years ago in order to lose the weight he had put on after giving up smoking. This took real determination as Les had been a smoker for forty years and he decided that he would run for charity in two half marathons in his first year of running. Unfortunately, Les's health has recently taken a turn for the worse and he has become a regular visitor to the Blood Taking Service at St Cross and wanted to run to support the Appeal. Musician Lee-Anthony has picked up the baton of doing the running - leaving Les (57), who is an automotive designer, to do the fund raising.  Lee-Anthony will be running in the Coventry half marathon this weekend and then in the Warwick Half marathon three weeks later. The team aim to raised £500 and Les has said he hopes to be running for the Charity in the Autumn.