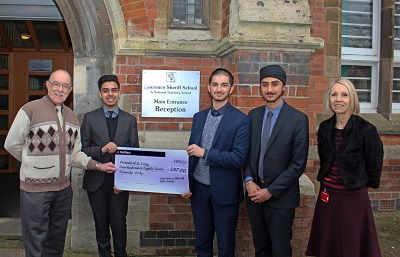 Three sixth form students from Lawrence Sheriff School got together recently to raise £187 for the Friends of St Cross Diamond Jubilee Appeal.

Sandip Nagra said “A few months ago Tony Cousins, Vice President of the Friends, came to the school to give a talk about St Cross to a group of students who are interested in a career in medicine. Mr Cousins mentioned that the charity has the aim of raising £60,000 and we thought it was a great opportunity to help the community.”

Di Halestrap, Head of Sixth Form at the school, said “the boys did this entirely under their own initiative and they did tremendously well. The students are a real credit to themselves and the school.” Uzair Asif added “we enjoyed conducting the event as it was a new experience for us.”

The boys raised the money by selling Krispy Kreme donuts and Wajahat Mughal explained that “Krispy Kreme have a charity scheme which allowed us to have a large profit margin. Many people know about Krispy Kreme so we knew it wouldn’t be a problem taking orders. Judging by the popularity of cakes and biscuits in the school we thought it would be a perfect opportunity for a successful fundraiser.”

Tony Cousins was delighted by the way in which the talk he gave has borne fruit and said “We offer free roadshows about the charity and the history of St Cross in order to widen our engagement with the community and this was the first talk that we have given to a school audience. We look forward to building an on-going relationship with Lawrence Sheriff and other schools in the area.”