One of our long serving volunteers given a fitting send off 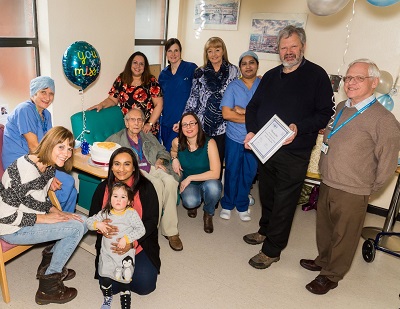 A long serving volunteer has been given a fitting send off after helping to make a difference for more than a decade.

When veteran volunteer John Lynch announced that he was going to retire after a recent bout of poor health. Sister Melanie Speed, lead for the cataract surgery service, decided to enlist the help of day surgery theatres, ward staff and fellow volunteers at the Hospital of St Cross, to hold a small surprise party to thank him for his loyal and outstanding service.

John first started volunteering in 2008 shortly after his wife passed away and he offered to come into the hospital on Christmas Day to help feed patients. This was the beginning of the Mealtime Companion service which is provided by a number of volunteers from the Friends of St Cross.

Not long after he started volunteering John joined the group of volunteers who serve by Holding the Hands of patients undergoing cataract operations at St Cross. Melanie Speed, Clinical Theatre Sister, presented John with a collage of photographs of him and the team in theatre and said “John has been a much loved integral member of the team ever since he joined us. Having volunteers re-assure patients prior to and during cataract procedures makes a real difference to the patient experience as many of them have undergone the procedure or witnessed it on many occasions and so can offer a non-clinical personal touch.”

Willy Goldschmidt, Chairman of the Friends of St Cross, presented John with a certificate thanking John for his ten years of service and said “John has been an inspiration to so many by helping to establish the services in which he volunteers. One thing he did not know is that he held the hand of one patient on two occasions and she has since become a volunteer in the theatre and is considering becoming a trustee of the Friends as she wants to give back to the hospital that has helped her a great deal in recent years.”

John thanked all who came to the party from theatre, Mulberry ward, the hospital management team and the Friends of St Cross and said that “Volunteering has been a great part of my life for these last 10 years and I will miss it.”

We all said we would miss him too!

In May John was honoured with the Long Service Award at the Pride of Rugby Celebrations!

Photo by Bob Mercer: John Lynch (seated) with representatives of the team of staff and volunteers who worked with John at the Hospital of St Cross.