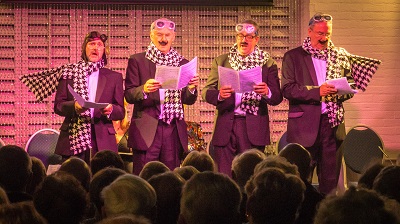 Over 100 friends of the late Julie Gordon and supporters of the Friends of St Cross were joined by Councillor Sally Bragg, the Mayor of Rugby, to pay a special tribute to one of the stalwarts of the Charity.

Julie recently passed away and only last year was congratulated, by Tim Cox, the Lord Lieutenant of Warwickshire, on 15 years of service to the Charity.

The occasion, which Julie had helped plan, was a concert given by local singers Cavatina and featured songs from shows including Anything Goes, Mamma Mia, Les Miserables, Showboat and the Sound of Music.

Julie had been a professional dancer who had set up and run the Poynton Dance Studio and also choreographed demonstration dances at several of the Charity’s fundraising events. Two numbers were dedicated to and featured videos from 2006 which highly amused many of Julie’s former students who came to pay tribute to her on the evening.

Other high points of the evening were when two of the ladies from Cavatina performed a parody on the Flower Duet (also known as the British Airways song) which mimicked the flight stewardess safety announcement! This was followed by the four male members of the ensemble singing Those Magnificent Men in their Flying Machines. The Fundraising Team joined in with the fun for one number also!

The Mayor drew the raffle and thanked Tracey Lennard and her husband, Nigel, for hosting the event and those present for their support as well as thanking the Friends for all that they do for ‘our hospital’. Richard Powell, who organises Cavatina’s engagement said “we are a local group of mainly amateur singers who like to support local charities and as a user of the Friends Blood Taking Unit was delighted to arrange this function.” Richard can be contacted on This email address is being protected from spambots. You need JavaScript enabled to view it..

Willy Goldschmidt, Chairman of the Friends, said “this event raised £2,000 and was a wonderfully fitting tribute to Julie. The Charity is indebted to her, the Fundraising Team and all the volunteers who help us make a real difference for the patients who use the Hospital of St Cross and the local Community and Mental Health Services.”

More pictures from the event can be seen in this album on our Facebook page.