Children from Bilton C of E Junior School teamed up with members of the Rotary Club of Rugby Dunsmore and the Friends of St Cross to plant 5,000 crocus corms at the Hospital in support of Rotary International’s Purple4Polio campaign.

Polio is a crippling disease and for over 30 years, Rotary International and its members have been committed to fighting to eradicate polio across the world. In 1988 polio cases were being reported at 1,000 per day and we are now down to less than 1 per week.  All polio outbreaks are currently being contained within the 3 countries but this is only because of the massive immunisation campaign that must continue throughout the world until the virus is eradicated.

With eradication now closer than ever, Rotary International in Great Britain and Ireland’s latest campaign, Purple4Polio, is designed to unite communities to engage in activities as part of the final push to eradicate polio for good.

The Rotary Club of Rugby Dunsmore are great supporters of the Friends of St Cross and the two charities approached the local hospital management who welcomed the idea of planting 5,000 purple crocuses in the hospital grounds to show their support for the campaign and to strengthen their and the charities engagement with the community. Juliet Starkey, Group Manager at the Hospital of St Cross said “I was delighted to support this joint initiative by the Friends of St Cross and the Rotary Club of Rugby Dunsmore who have been such strong supporters of the Hospital over the years. It was a great to have such wide community engagement for the drive to eradicate polio and I am sure that staff and patients will be cheered by the display and reminded of the campaign as they drive into the main hospital car park in February.”

The Friends approached Mrs Norton, Head Teacher at Bilton C of E Junior School, who held an assembly about the campaign and asked pupils to tell their parents and invite them to bring them to the hospital to help with the planting of 5,000 crocus corms. Afterwards Mrs Norton said "It was wonderful that so many parents and children came along and gave up part of their Saturday morning to support such a worthy cause. We had a great time and the children now have a little understanding of the campaign to eradicate polio and also how the community can bind together to support campaigns such as this. We look forward to coming back to the hospital in February to see the display of crocuses. We also were given some bulbs to take away with us to plant at school to remind us of our fabulous morning." 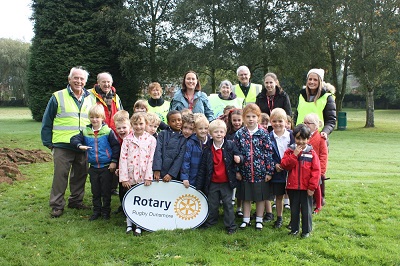 Dunchurch Infant School were also approached and said they were very proud to be offered the opportunity to work alongside the Rotary Club of Rugby Dunsmore to plant 10,000 crocus corms to help with the awareness of the ongoing challenge to eradicate Polio throughout the world.

Rotarians Mike Beck and Steve McConnell delivered an assembly to the children and explained that the purple crocus signifies the purple dye that is applied to an immunised child’s little finger on National Immunisation Days so it is clear they have been immunised and no child has been missed.  The children went home full of enthusiasm about their walk through the village to help plant the corms in the grass area on the Rugby road opposite Cawston Lane.

Lisa McConnell, Teaching Assistant at Dunchurch Infant School, said “our Head Teacher, Mr Ian Dewes, actively seeks to involve children in community projects whenever possible and this helps the school achieve the ‘Over and Above’ aspect of the curriculum within our school. When talking to the children after the event, lots of them enquired when they would see the plants growing up through the soil and could we make sure they had lots of water (surely the good old British weather will meet that requirement!) during the winter months. Thank you Rotary for allowing us to join you in this project.  I feel a thoroughly enjoyable and educational day was had by all involved.”

Willy Goldschmidt, Chairman of the Friends of St Cross and a member of the Rotary Club of Rugby Dunsmore said “It was wonderful to see all these elements of the community come together to make this happen. The task was made much easier because the staff at the Hospital and the Greenspace Team at Rugby Borough Council had already prepared the ground at the two sites for planting. We all look forward to coming together in February to see the display of flowers.”