Santa and Friends raise over £5,000 for Sleep Studies Project 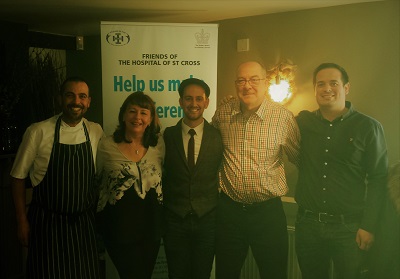 Just one month after announcing the Friends project for 2017 the Charity has already raised £5,750 towards the £80,000 target!!

The first fundraising event was a ‘lazy lunch’ at the Old Lion at Harborough Magna when a small group of supporters enjoyed an excellent meal while being entertained by Aaron Gibson and raised over £600.

This was soon followed by a team of eight Friends of the Friends comprising Juliet Starkey, the Group Manager at the hospital, three members of the Blood Taking team and several members of Willy Goldschmidt’s family taking part in the UHCW Charity Jingle Jog to raise £1250.

Willy Goldschmidt, Chairman of the Friends said “Once again we have received tremendous support from all corners of the community with donations from regular supporters including the Ladies of Hanover Gardens who raised £850 from their sale of hand knitted goods and donations from the Hindu Community totalling £711. We look forward to the New Year when we hope to gain support from the local transport and distribution businesses around the town who we believe will have a special interest in the Sleep Studies project!” 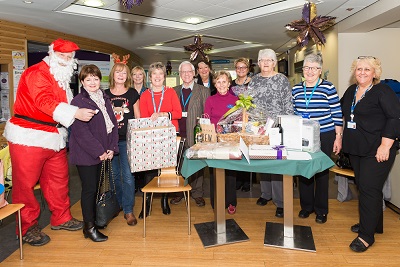 Other December 2016 events were the Christmas Market at the Benn Hall, where we sold some of a vast collection of Beanie Babies and Christmas raffle tickets to raise £130 and a the Charity also benefited by another £65 share of the collection at the the Christmas Carol Concert organised by the Rotary Club of Rugby Dunsmore and held in St Peter's Church in Dunchurch.

The Christmas Raffle was drawn by Santa with help from several staff from the hospital and trustees of the Charity.

The total raised by the Raffle was another £2,190 thanks to the wonderful selection of some 20 prizes donated by supporters and local businesses including Jamesway Travel, M&M Jewellers, Carvells Electrical, Wasps Rugby, Mister Robinsons Barbers, RIMO Growers, The Huntsman, Hair Boutique Salon, Beauty Secrets, Maired Beauty Treatment, Cineworld and Sainsbury’s Rugby.