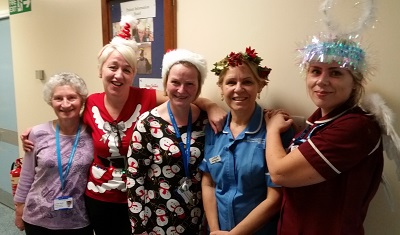 The Friends were involved in lots of activity over the Festive Season at St Cross!

Santa came early, on the 15th of December, to witness the Mayor of Rugby drawing the annual Christmas Raffle which for the third year running raised over £2,000. The success of the raffle is due in large part to the great collection of 21 prizes which were donated by our supporters and the Mayor was joined by James Pak of Jamesway Travel, who donated the top prize of a trip to Royal Ascot, as well as staff from the Coventry Building Society and Trustees of the Charity.

Then on the 19th and 20th Santa met the elves in the Ash Dialysis unit who were running a festive themed bingo sessions for the patients of the unit.

Over the holiday our Festive Befriending initiative was a great success with over 50 people offering to come into the hospital on up to 160 occasions to brighten up patients who may have been feeling especially lonely at this time of year.

Willy Goldschmidt, Chairman of the Friends, said “The raffle was a most welcome boost to our fundraising at the end of the year! By the end of November 2017 we had spent approximately £115k and have committed a further £94k for projects which we expect to be delivered by the Trust at St Cross in 2018. Of course we could not do this without the tremendous support we receive from local businesses and the wider community in and around Rugby.

“We have now recruited 4 volunteers (and are looking for more) to run bingo sessions in Ash and have donated funds for the team to buy prizes for the winners. Up until now the staff have been running the sessions in their own time and buying prizes out of their own pockets and we felt it was only right that the charity stepped in to support them as they make such a difference to the patients they serve.”

“This was the first time that the Friends have run the Festive Befriending initiative and early feedback has been that it has been much appreciated by patients, staff and all those who took part. We hope to recruit some new volunteers as a result and will host an event at Out Patients in St Cross between 10 and 1 on Saturday the 20th January. We welcome people from all corners of the community – so if your new resolution is to volunteer to give back to society, and the NHS in particular, why not come along and meet us then to find out more!”

Elves at the Ash Dialysis unit with a new bingo calling volunteer and two of the nursing team!